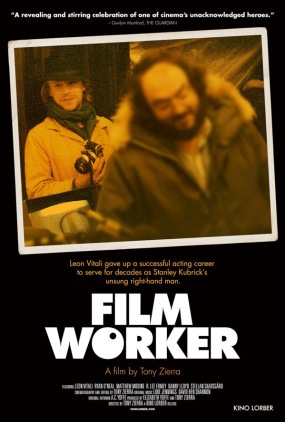 Film Worker is a documentary which details Leon Vitali’s life as Stanley Kubrick’s assistant (for lack of a better word). The film begins by establishing Vitali’s successful career in film and television during the 1970s with a montage of clips from that time. Vitali’s voice over describes his life then, listing the many genre’s he dabbled in. His young face fills the screen, those big features of his staring out of the pages of magazines and reacting in soap operas.

Vitali recalls seeing 2001: A Space Odyssey (1968) and the profound effect the film had on him, a moment which germinated his devotion to Kubrick. Vitali was then cast in Kubrick’s Barry Lyndon (1975), during which Kubrick was so impressed with him that his role as Lord Bullingdon was extended. After appearing in this picture Vitali was offered many acting roles as people were so impressed with his performance. However, since his initially experience of working with Kubrick, Vitali hoped to aid the director behind the camera, demonstrating this by sitting-in on the cutting room operations of films he was starring in, after hours and for no pay. After this display of dedication, he was hired by the director and from that point on stayed by his side, running perhaps every possible errand and aiding with every task, both on film sets and in the wider, Kafkaesque, bureaucratic hellhole that is and was the Kubrick estate.

Film Worker’s narrative is driven by the recollections of Vitali a various talking heads which include Ryan O’Neal, Danny Lloyd, Stellan Skarsgard, Matthew Modine amoungst many others. What Film Worker does so brilliantly is use clips from Vitali’s screen work and Kubrick films to describe what is being expressed verbally. For example, when Vitali is describing a moment of overwhelming difficulty, a film clip of Vitali struggling in ice water is played, and when Kubrick is described as shouting a his crew, a clip of the Sargant Hartman (R. Lee Ermey) shouting at soldiers in Full Metal Jacket (1987) is shown. Thus, the film demonstrats the relationship between “real” life behind the camera and the cinematic representation of life. By demonstrating off-screen narrative using cinema and television, the two are succinctly interlinked and rendered less distinct, especially for those working in the industry. In fact, the use of such clips is so effective as a story telling device that it is a shame it is interrupted by an occasional badly rendered animation and shots of the poorly framed talking heads. The animations are sketchy, pixilated (!) line-drawings of Vitali with an oversized head, whilst the talking-heads have been unnecessarily shot in high-definition, making faces appears red and blemished. As well as this, the camera also sits too close to its subjects, creating a claustrophobic frame. Vitali appears to be sat at home with books and clutter in the background which is a little off-putting but wouldn’t be an issue if the frame weren’t so tightly closed in on him. The camera also sits slightly too low instead of facing the subjects squarely so their overly-defined faces are also shot from a bad angle. These errors are – at least initially – very distracting. Considering that there are only two visual methods being employed – talking heads and archive footage/stills – it seems a surprising and inexcusable mistake to have not properly considered the framing. If the camera had been brought back a little, faced the person straight on and lit them softly, the film would have had an overall smoother appearance and, thus, enhanced the viewing pleasure.

Despite this aesthetic failing, I did enjoy Film Worker and its illumination of someone who worked so hard despite having been treated pretty terribly. Leon Vitali is a charismatic raconteur who expresses details large and small with a good measure of intricacy and context. I am not a huge Kubrick fan, but this didn’t really matter in this film because Kubrick plays supporting role to Vitali. In this sense the cinema performs a kind of justice after Vitali dedicated his life to supporting Kubrick. However, because the film treats Kubrick’s genius as a given, his toxic and unpleasant behaviour pretty much goes not only without saying but also without proper criticism (perhaps with the exception of one female film worker whose name I can’t recall). Because of Kubrick’s unpleasant side combined with Vitali’s loyalty, Vitali himself almost becomes frustrating for putting up with someone who borders on cruelty and who is never made responsible for his behaviour because…he’s a genius apparently and their artistic vision comes before anything else plus Vitali finds pleasure in this cruelty? Maybe I’m painting this a little harsh but no one in the film particularly refutes these positions. As with other documentaries of this ilk, a little “psychology” is thrown in and through a glimpse into Vitali’s childhood constructed primarily through an interview section with his siblings, some loose threads are tied between notions of Vitali’s father who dies when Vitali was eight and Kubrick as a force of power and – perhaps -paternal law. This moment with the siblings, two older brothers and one younger sister who all share a couch, is also revealing as it allows us to recognise the stress and exhaustion permanently etched and absorbed into Vitali’s face, an aging process not shared by the other Vitali siblings.

As well as Kubrick’s unpleasantries, Hollywood is also shown to be ignorant and disrespectful when it declines to celebrate or even include Vitali in a large Kubrick retrospective in Los Angeles. Film Worker’s function then is to not simply celebrate an important but overlooked figure in cinematic history, but to recognise invisible film workers more generally. Indeed, Vitali becomes a kind of synecdoche for the many people behind the camera who continually go unrecognised.

Shapeshifting siren in2 critical film writings. To engage in the conversation: ilovejamesls at gmail dot com. View all posts by jameslslattery